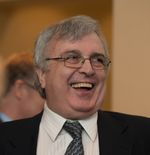 Byrne Alexander Fulton
April 16th 1948 – June 3rd 2020 (age 72)
Byrne was born to Angela and Greg ‘Facts’ Fulton in Calgary, Alberta and passed away peacefully on June 3rd, 2020 in Richmond Hill, Ontario.
Byrne spent his early years in Calgary, later moving to Toronto where he met the love of his life, Sharon. They married in 1970 and remained together for 43 years until Sharon’s passing in 2013.
Byrne earned his Bachelor of Arts at Loyola College in Montreal and his Bachelor of Commerce at the University of Windsor, leading to his long career as a Chartered Accountant.
For those who knew him, Byrne will always be remembered for his quick wit, sense of humor and ability to make you laugh. Adventurous and curious by nature, when it came to food Byrne was not discriminatory. He never met a fast food outlet that he didn’t like.
Loving father of Stephen, Laura Elliot (Peter), cherished grandfather of Alexandra and Carter. Brother of Robert (Eve) and Rebecca. He will be missed by his brother and sister in law, Bruce and Vicki Baker.
The family sincerely thanks the staff at Langstaff Square Care Community for supporting Byrne during his last year. At Byrne’s request, cremation has taken place. Due to the current world circumstances, internment and celebration of life will be held at a later date.
In lieu of flowers, the family requests that donations be made to the Heart and Stroke Foundation or the Canadian Lung Association.