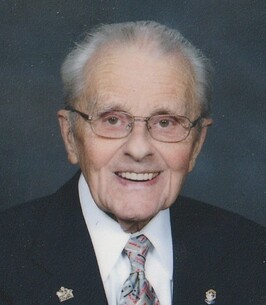 Williams, Charles Norman (also known as Chuck, Charlie) - Passed away at Southlake Regional Health Centre, on Thursday, April 29, 2021, in his 95th year. Beloved husband of the late Shirley (1999). Loving father of Lauralea (Dave James), Jonathan Williams (Christine) and his late daughter Penny (1967). Dear brother of the late Bill Williams (2001) and Blake Williams. He will be sadly missed by his grandchildren Chris, Chad, Ben and Owen.

Charlie was born and grew up on the family farm in King Township. He worked in the insurance business in the 1950's and then became a founding partner at Smith Williams and Bateman Insurance in Newmarket. He was an active member of Trinity United Church, a life member of Newmarket Lions Club and a member of Probus Club.

He believed in giving back to the community when he could with his time and then later with financial contributions.
5 years ago he left his home in Newmarket to move to the Meadows of Aurora, where he was their “goodwill ambassador” always trying to get more people to buy a condo. Special thanks to Meadows friends Dave and Joan, Irene, Julie and Rosemarie as well as to his grocery guy, Ross.

A celebration of Charlie's life will be held at the Roadhouse & Rose Funeral Home, 157 Main St. S., Newmarket, on Saturday, October 29, 2022, at 1 p.m. For those unable to attend the service, a live stream recording will be available.

If desired, memorial donations may be made to the Southlake Regional Health Centre Foundation would be appreciated. On-line condolences may be made at www.roadhouseandrose.com