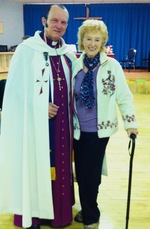 Googh, "Gigi" Connie Ethel Esther (nee Goodwill)
Passed away peacefully at Southlake Regional Health Centre on Wednesday, March 20, 2019 in her 88th year.
Loving wife of the late Ron Googh. Beloved mother of Linda Googh Roback. Proud grandmother of Jerry Roback and his wife (Dr. Amanda Warren-Roback). Survived by her brother Chief Petty Officer of the Royal Canadian Navy Neil Goodwill and his children, Diane, Judy, Danny, Paula and Glen. She will be missed by nieces and nephews Ronnie, Sandy, Shirley and Randy Dawe and their families. Gigi was a long-time member of the Aurora Legion and the Seniors Centre. She was involved in line dancing, fitness and friends. She was a banker and accountant for many years, she continued to work as an accountant for her daughter until she passed away. The family would like to thank York Region Emergency First Responders and Paramedics, as well as the caring nurses and doctors at the Southlake ICU / Cancer Care and the Radiation and Chemo Team at the Stronach Cancer Centre. Special thanks to the family and friends who have reached out with their support. A Celebration of Gigi’s life, Gigi’s Jazz, will be held at 11 a.m. on Saturday March 30, 2019 followed by a luncheon at Aurora Royal Canadian Legion Branch 385, 105 Industrial Parkway North, Aurora. Officiated by close family friend, Archbishop Dorian Baxter. Memorial Donations may be made to the Stronach Cancer Centre. Online condolences at www.roadhouseandrose.com