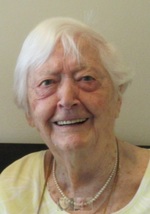 Born June 2, 1922, passed away peacefully in her 99th year at home on Tuesday October 20, 2020 with family by her side. Predeceased by her husband Hermann in December 1974 and her eldest daughter Lilly Borges Oldham (Stuart) in August 2002. Loving mother of Karen (Hans Saamen). Proud Oma to Brian (Melanie) and Marie (Joseph) and great Oma to Evelyn and Wesley. Ilse immigrated to Canada from Hannover Germany in 1952 with her husband Hermann and settled in Windsor where they promptly had Lilly in 1953. In 1958 she moved to Newmarket where she happily resided for the rest of her life, spending the last 35 years in the first condo building in town. She was a remarkable, intelligent, proud woman, fiercely independent with incredible determination which served her well through many difficult challenges, including surviving World War II in the heavily bombed city of Hannover. Ilse was employed from a very young age in numerous offices where she worked variously as a translator, bookkeeper, office administrator and payroll clerk. From 1945 to 1947 she worked as a translator for the allies occupying Germany in the British zone, a time she colourfully recounted. Over the years she shared numerous stories from the war years highlighting the importance of resilience and perseverance. Always keen to have a spirited political discussion and play a brilliant game of scrabble, we did this to the very end.

Special thanks to the caring staff of Heritage and Country Houses at Bradford Valley Care Community and to the many wonderful, kind and thoughtful friends who supported Ilse at 40 William Roe.

Visitation will be held at Roadhouse & Rose Funeral Home, 157 Main Street South, Newmarket on Friday October 30, 2020. If you would like to attend the visitation please RSVP with your name, phone number, which visitation period and how many people will be attending with you at rsvp@roadhouseandrose.com or call 905-895-6631.

As an expression of sympathy in lieu of flowers, memorial donations may be made to the Nature Conservancy of Canada, The Toronto Zoo or Grandview Kids