To share your memory on the wall of Joan Atkins, sign in using one of the following options:

Your condolence has been submitted for approval. There may be a delay before posting.

Joan was born on August 19, 1925 (debatable) in a small town called Grimsby, (Lincolnshire, UK) and grew up in a modest home environment. She shared only a few memories about her childhood and we suspect her life might have been hard. She left home when World War 2 broke out and even though she was underage, Joan managed to enlist and served as a chauffeur with the Women’s Auxiliary Air Force from 1941 until 1945. Joan was always very proud of her driving skills.
During the war, she met her husband who was Canadian and happily moved to Canada and became a true Canadian.
Later in life Joan operated a small jewellery business, however, selling jewellery played second fiddle to consoling and advising the people she met at work (mostly young people). She was the Dear Abbey of Knob Hill Farms.
Friendly, outgoing, energetic with a refreshing positive outlook. This is how everyone views her until her late 80s. This is how we will remember her.

A Celebration of Life Service will be held at Roadhouse & Rose Funeral Home at 157 Main St. S. in Newmarket on Saturday Dec. 14 at 2pm for family and friends.

Flowers are not required, but happy memories are encouraged.
Online condolences can be made at www.Roadhouseandrose.com
Read Less

To send flowers to the family or plant a tree in memory of Joan Atkins (Overy), please visit our Heartfelt Sympathies Store.

Receive notifications about information and event scheduling for Joan

We encourage you to share your most beloved memories of Joan here, so that the family and other loved ones can always see it. You can upload cherished photographs, or share your favorite stories, and can even comment on those shared by others.

Posted Dec 14, 2019 at 03:30am
Our sincere condolence to Pamela, Kyla, Shauna and all their family members on the passing of a beautiful, warm and fun-loving mother, grandmother, great grandmother and friend. May you be comforted by all your happy memories of the wonderful times you spent together. I know it will take time for you to heal from the sadness of your loss as I know only too well as my mother, Veronica, passed away 3 weeks before Joan at age 92.
In recent years Joan and Veronica would spend time together sharing a meal and telling each other stories of their lives and sharing in laughter over a joke or funny occurrence. In the past couple years they would be talking after lunch then both would fall asleep. It was really very cute to observe them.
I will always miss Joan with her beautiful smile and welcoming spirit. We had such good times, especially enjoying a glass of red wine, her favourite.
Farewell Joan and rest in peace. Your journey on earth has ended,however, I truly believe that you are now in another world which Jesus Christ promised to us and I pray one day we will meet again.
With sincere sympathy & friendship,
Judy, Walter & Family (Haars)
Comment Share
Share via:
S

Posted Dec 12, 2019 at 07:50am
Your granddaughter, Kyla, is passionate, enlightened and strong, just as you were. She is your living legacy and will be cared for. Rest In Peace. 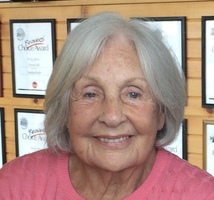 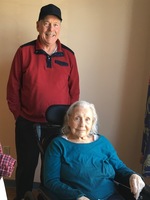 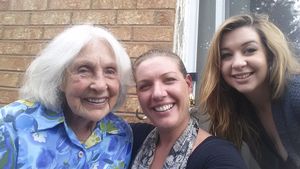 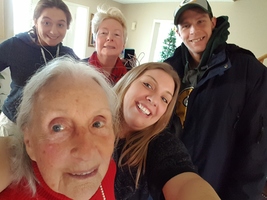