To share your memory on the wall of June Matheson, sign in using one of the following options:

Provide comfort for the family of June Matheson with a meaningful gesture of sympathy.

June was born in Matheson, Ontario and lived a life common in rural Northern Ontario of the early 1900’s. Hard work was a necessity for living and June carried this trait throughout her life. June’s formal education ended in Grade 8. June spent three years in Gander Newfoundland during the second world war. Shortly thereafter she met her husband, Gordon Matheson, while working at the Malartic Mines. That good looking, quick witted, tennis playing geologist really grabbed her eye. They married on April 16, 1949 in Kirkland Lake, Ontario. The family lived in many mining towns throughout Northern Ontario, Northern Quebec, with a short stint in Bathurst New Brunswick, finally landing in Toronto Ontario - Hawksbury Drive - in December of 1963. It was here that June lived for 50 years. Surviving the early passing of Gordon in 1968 and raising her four children. Shortly after the passing of Gordon, June took a job in the admitting department of North York General Hospital. She worked there till retirement at the age of 65. Mom always thought it ironic that she collected a pension from the hospital for a period that was three times longer that the number of years employed! A mom to many, a seamstress, a baker, June’s house was open to, and enjoyed by all the children’s friends.

Memorial Donations may be made to:

We encourage you to share your most beloved memories of June here, so that the family and other loved ones can always see it. You can upload cherished photographs, or share your favorite stories, and can even comment on those shared by others. 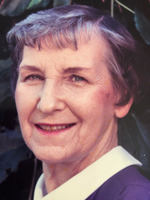