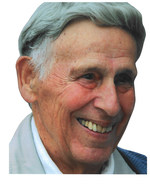 It is with a heavy heart that we announce the passing of Lawrence Lassaline, on May 24, 2020 at Southlake Regional Heath Centre in Newmarket ON at the age of 96.

Reunited with his parents Eugene and Maud Lassaline, his two sisters, Edna and Sister Antoinette of the Congregation of Sisters of St. Joseph and four brothers Francis, Lucein, Edgar, Antoine. Survived by his brother Charles Lassaline (Imelda).

Lawrence was born in Sandwich East (Windsor) Ontario on Oct 1, 1923. When he was 7 years old his family moved to St. Joachim, where they lived until he finished high school.

Lawrence jumped at the chance to learn a skilled trade when he began his welding apprenticeship at Dominion Bridge Works where he was welding harbour tug boats for the D-day invasion.

In 1943 Lawrence joined the Royal Canadian Airforce, where he was stationed in Tofino, BC and worked combined forces on communication for US Army, Canadian Army, Airforce and Navy.

When Lawrence received his release from the RCAF, he purchased a 100-acre farm near Inwood, Ontario. He returned to his welding trade, working with Catalytic Construction in the refineries in Sarnia, Ontario as well as continuing to farm his land.

In 1950 he married the love of his life, Ila Johnson. Together they built a beautiful life, starting with a farm house from the ground up.

14 years and 5 children later, they made the move to Newmarket, Ontario. Where Lawrence went into a partnership in Aurora Tank and Welding Supplies, with his brother Edgar Lassaline.

After Semi retiring in the 80’s, Lawrence consulted for King Cole Ducks, designing and building the feather plant and mill in Queensville, Ont. that would process over 1000 lbs of dry feathers per day.

At the age of 65, Lawrence decided to fully retire, but not be idle.

In the year 2000 Lawrence and Ila decided to move into a condo in Newmarket, Ontario, where he would live out the rest of his years volunteering, gardening and woodworking. Lawrence spent much of his time creating beautiful gardens and an amazing Gazebo for all to enjoy.

Lawrence was coined the Tomato king, and he earned the title by producing the most delicious tomatoes you have ever eaten. He took pride in his gardens and would jump at the chance to share his knowledge and growing tricks, while giving a tour of his gardens to anyone who would listen.

When Lawrence was not tending to his gardens he enjoyed spending time with his family and a good game of cribbage on the back porch and volunteering his time.

The same year Lawrence, was honoured with the Citizen of the year award from the city of Newmarket. He was known for donations to Southlake Regional Heath Centre, his dedication for 20 years as a volunteer driver at the Canadian Cancer Society and his volunteer work at Saint John Cemetery.

In 2012 he was awarded the Queen Elizabeth II Diamond Jubilee medal for his extensive volunteer work.

Lawrence worked hard and lived an amazing full life. He will be greatly missed by his family, friends and community.

If you so desire, donations in honour of Lawrence can be made to the Canadian Cancer Society or Southlake Regional Medical Centre.

Due to current restrictions, a private service for immediate family will take place and a celebration of life will be held at a later date.