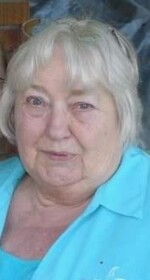 It is with great sadness we announce the sudden passing of Marjorie Blanche Gregg of Newmarket, Ontario on Sunday February 21th, 2021, in her 87th year.

Born on April 20th, 1934 she was a kind, spiritual, and sentimental woman with a gentle spirit. Initially stepping into the workforce in an office, she changed gears to domestic goddess raising their four children alongside her husband George. When her children were grown she returned to the workforce as an office administrator until her retirement, always leaving a place better for her having worked there.

Never one to shy away from new challenges, over the years Marjorie tackled new interests such as antiquing, upholstery, ceramics, painting and making and bottling her own wine among her other many varied interests. After her husband's passing, she took in her four-legged companion Scruffy who enriched her life as much as she did his. She never took for granted the simple pleasures in life whether it be the caramel sweetness of a date, receiving a handwritten letter in the post or to head out for a drive on a warm day just because she could. Moments spends sharing stories lined with her sharp wit and humour over a cup of coffee were often filled with laughter and cherished by those who knew and loved her. She had the ability to hug deeply and always left those who were fortunate enough to receive one with a feeling of warmth. The relationships Marjorie had with her family and friends were invaluable and she will be greatly missed by them all.

If desired donations may be made to the Heart & Stroke Foundation in Marjorie's memory. On-line condolence's at www.roadhouseandorsecom