To share your memory on the wall of Mykhaylo Hrechko, sign in using one of the following options:

Print
It is with a great sadness we inform you that on October 16, 2020, Mykhailo Hrechko peacefully passed away after a long battle with the Parkinson disease.

Mr. Hrechko was born in Ukraine in 1934 and lived in Canada since 2000.
Read More
It is with a great sadness we inform you that on October 16, 2020, Mykhailo Hrechko peacefully passed away after a long battle with the Parkinson disease.

He will be dearly missed by his wife of 57 years Valentyna Hrechko, his son Gennadiy Grechko, his daughter Elena Greynolds, son-in-law Eric Greynolds, grandchildren Andrew, Daniel, and Alexander, and his twin brother Nikolay Grechko.

Mr. Hrechko spent his career working in Ukraine’s hydroelectric industry. While in Canada he enjoyed woodworking, writing poetry, travel, and gardening. He was an eternal optimist and a fighter until his last breath.

To send flowers to the family or plant a tree in memory of Mykhaylo Hrechko, please visit our Heartfelt Sympathies Store.

Receive notifications about information and event scheduling for Mykhaylo

We encourage you to share your most beloved memories of Mykhaylo here, so that the family and other loved ones can always see it. You can upload cherished photographs, or share your favorite stories, and can even comment on those shared by others. 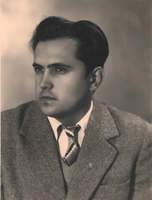