To share your memory on the wall of Robert French, sign in using one of the following options:

Robert passed away peacefully at home in his sleep, on Thursday April 9th at 83 years of age.
He is survived by his Loving Wife Dawn (nee Shillington), his daughter Sherry, and son Robert, as well as his son in law Paul, and daughter in law Krystina. Cherished grandfather to Tiana, Paul Jr, Lily, Berlyn & Emma, and great grandson Marcus.

Robert led an interesting and varied life, he was ‘the Gentleman Bank Robber’ in the 50’s, worked on Jet planes in the Canadian Air Force, Was one of the Queen Mother’s bodyguards during her 1963 visit to Ottawa, was Head Chef for the McMichael Art Gallery in the late 60’s and early 70’s, serving the Group of 7, Premier Bill Davis as well as the Queen’s sister and was a personal chef for AY Jackson. He loved to invent things: French Fried Ice Cream, the Coffee Kiss, and the Cream Machine – still used today in Donut shops everywhere to dispense Cream for coffee. In his later career, he was a salesman for various Dairy Companies in Toronto – he could sell Ice to the Eskimos. He was definitely a character, made everyone everywhere feel welcomed, and like family, and will be remembered forever by his tagline ‘keep smiling’.

He is greatly missed.
Read Less

To send flowers to the family or plant a tree in memory of Robert French, please visit our Heartfelt Sympathies Store.

Receive notifications about information and event scheduling for Robert

There are no events scheduled. You can still show your support by sending flowers directly to the family, or planting a memorial tree in memory of Robert French.
Visit the Heartfelt Sympathies Store

We encourage you to share your most beloved memories of Robert here, so that the family and other loved ones can always see it. You can upload cherished photographs, or share your favorite stories, and can even comment on those shared by others. 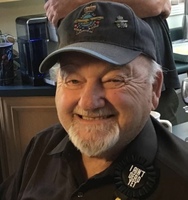