To share your memory on the wall of Susan Beddice-Gleason, sign in using one of the following options:

Sue was born in Toronto on March 2, 1958. During her ... Read More
Susan Anne Beddice-Gleason (60) of Toronto Ontario passed away unexpectantly in the early morning hours of Monday January 21, 2019 at South Lake Regional Health Centre from pneumonia.

Sue was born in Toronto on March 2, 1958. During her younger years, Sue lived abroad with her parents & siblings, as her father, Ronald Beddice was in the army. Sue shared many memories of the exciting places she lived, with especially fond memories of her time in Germany.

As a young teenager, Sue shared her wistful memories of the time that she lived with her loving Aunt Rena, Uncle Joe & her many valued cousins. These stories were endless, however, always recounted with the fondest of memories.

She resided in Toronto for most of her early adult years, while raising her young children, Jason & Dennis, moving to British Columbia after her marriage to her husband, Brian Gleason. From BC Sue & Brian moved back to Ontario living in Newmarket & later in Richmond Hill.

Sue met Brian when she lived on the Lakeshore in Toronto, introduced by Sue's friend/Brian's mother, June. Sue & Brian were married on April 21, 1990. They were not only husband & wife, they were best friends. Sue really enjoyed taking care of her husband & Brian's dry humour & spontaneous thoughtful acts truly warmed Sue's heart. Theirs' was a marriage to admire & aspire to.

Sue loved to cook & hosted numerous family gatherings at her family home, where everyone was welcome to attend. She was extremely creative. Her novelty cakes & desserts were delicious, absolutely beautiful & were frequently requested by family & friends to highlight their special occasions. Sue loved painting, crafting, cooking, baking & spending time with the people that she loved.

When Sue's cousin Rosie & her grandchildren were coming for a visit, Sue was excited for days prior & weeks afterwards. Sue shared the accounts of every visit to everyone who would listen; "Ariana is so smart & such a little lady. Her hugs make me feel so good!" … "Logan is really smart too! … He is so mischievous! … He reminds me of Dennis."

Life forced Sue to be a very strong woman. However, if you truly knew her, you would embrace this sentiment … Sue was easy going & kind. She was not judgmental & she never held a grudge. Sue truly loved her family & considered her friends, as such. Sue was funny. It was truly amazing to watch her quick wit matched against her husband's dry humour … It was sincerely heartwarming & always entertaining!

Sue was a caregiver, she always went out of her way to help whenever she & Brian could. Hence the many years that Sue worked at Southlake Nursing Home. Sue encouraged the cultivation of long-term meaningful relationships among her peers & truly cared for, the seniors that she cared for.

Finally, when Sue's eldest son, Jason, moved back to Toronto from BC & spent the quantity & quality of time that he did with his mother; this meant the world to Sue, as she was able to fulfill a life-long dream. Jason grew up to be a respectable, admirable young man & he chose to befriend his mother. Something that we should all aspire to.

Please try to understand Sue's story, as we have tried to recount it … Sue was the Matriarch, she ran the household which housed the men that meant the world to her & she had the support of her husband, the man that she truly loved … AND … For that, all who deeply love Sue, should be eternally grateful!

To send flowers to the family or plant a tree in memory of Susan Anne Beddice-Gleason (Beddice), please visit our Heartfelt Sympathies Store.

Receive notifications about information and event scheduling for Susan

We encourage you to share your most beloved memories of Susan here, so that the family and other loved ones can always see it. You can upload cherished photographs, or share your favorite stories, and can even comment on those shared by others. 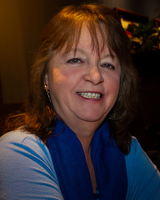