To share your memory on the wall of Trieu Ly, sign in using one of the following options:

Provide comfort for the family of Trieu Ly with a meaningful gesture of sympathy.

Trieu Ly; loving husband, father, grandfather (Trieupa), brother, brother in law, uncle, and friend, passed away unexpectedly on Thursday, April 2, 2020 at home.
He is survived by his loving wife Lisa; his adoring children Natalie, Emily, Rebecca, Jessica, and Victoria; his grandchildren Lindsay, Rylan, Logan, Daniel, Heidi, Liam, Oliver, and Madelyn; his siblings Phung, Loan, Khanh, Hoa, Le, Quang, and Hung; his nephews and nieces Vinh, Hao, Laura, Jeannie, Amy, Brandon, Sara, Melinda, Darren, and Hannah; his TOK Transit work family; and his many friends.
Trieu and Lisa were married on September 17th, 2016 and spent their free time traveling the world. He had a gentle soul who was caring, selfless, generous, and loving to all who knew him.
Trieu truly lived life to the fullest through simple pleasures like traveling with Lisa, catching up with friends and family, and helping others in need. Trieu was an 80’s enthusiast who was always listening to 80’s music and always touted the hairstyle to prove it.
Trieu was always passionate and committed to helping those in need especially children.
The family has requested that in lieu of flowers, donations be made to donations.for.trieu@gmail.com , that will later be sent out to charitable organizations for children in Vietnam, and Cuba.
In honour of how much Trieu loved Cuba and his home country Vietnam.
A cremation has taken place and a Celebration of Life will be held by Trieu’s family at a later date.
Rest in peace Trieu, you will forever be with us
Read Less

To send flowers to the family or plant a tree in memory of Trieu Ky Ly, please visit our Heartfelt Sympathies Store.

Receive notifications about information and event scheduling for Trieu

There are no events scheduled. You can still show your support by sending flowers directly to the family, or planting a memorial tree in memory of Trieu Ky Ly.
Visit the Heartfelt Sympathies Store

We encourage you to share your most beloved memories of Trieu here, so that the family and other loved ones can always see it. You can upload cherished photographs, or share your favorite stories, and can even comment on those shared by others.

Lisa, Natalie, Emily, Rebecca, Jessica and Victoria,
We are so sorry to hear of your loss. Trieu was such a wonderful blessing to your family.
We will never know just how hard this must be for you all. Our prayers for your strength at this most difficult time, are constant
and filled with deep thought and love for you all.
Please remember that our thoughts and prayers to our Lord are asking Him to bring you all comfort.

Posted Apr 06, 2020 at 10:18pm
Trieu, you will truly be missed. I have so many memories I don't even know where to begin. You had one of the biggest hearts anyone could have, you always welcomed everyone with open arms. I will forever miss walking into your home like family & saying "I'm Home" & you always made me feel like i was family. You always knew how to put a smile on someones face & make them laugh so hard their stomach hurt. You always made so much food we never knew how to eat it all & you always begged to us to eat more. I will miss your laugh & cooking. R.IP Trieu, Until we meet again.
Comment Share
Share via: 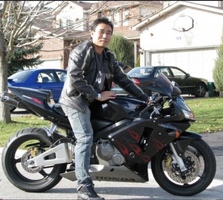