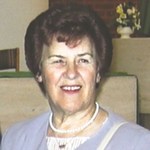 Wilhelmina will always be remembered for her love of family and her stoicism and grace during her illness this past year.

Donations in lieu of flowers can be made to Southlake Regional Health Centre Foundation.