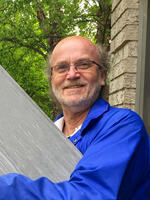 It is with great sadness that we share the news of the passing of Bill (William Russell) Andrews, just a few days before his 63rd birthday. Bill died at home on May 30th, 2020 after a private struggle with cancer.

Bill was a wonderful, fun-loving man with a huge heart and an easy laugh. He was a handyman supreme, a tireless Toronto sports fan, a loyal friend, and ALWAYS there for his large extended family. You could count on him for any renovation project, whether you wanted his help or not. He also had a reputation as a prankster, though he admitted to very little over the years. Bill’s professional career was spent as a loyal employee at Kimmel Sales.

Bill was a devoted father to Kyle. He was the youngest of five siblings, and so leaves a large extended family who will miss him dearly, including Arlene, Eileen, Lyndy, Donna, Sylvie, Michael, Tracey, Tamara, Christie, Steve, Mikayla, Hayden, Mark, Melissa, Alissa, Ashton, Zachary, Nicholas, Michèle, Todd, Madeleine, Noëlle, Jack, Rick, Erin, Danielle, Steve, Abby, Kenzie, Jannette and Reid. His untimely death deepens the hole in our hearts left by the passing of his sister Carolynn and brother Barry in recent years. Bill also leaves Gary Kimmel and Mike Thivierge, lifelong friends along with the late Mark Johnson. His parents, Irene (Taylor) and Russell Andrews were active members of the Richmond Hill community.

A celebration of his life will be planned when we are able to host such events again. The family welcomes pictures and tributes at the Roadhouse and Rose Funeral Home. In lieu of flowers, Kyle’s wish is for friends and family to do something special with their loved ones in Bill’s honour.