To share your memory on the wall of Julia Munro, sign in using one of the following options:

Julia worked as a high school teacher in York Region for 24 years, specializing in history. She received a Bachelor of Arts Honours degree from the University of Toronto and also served as the History Department Head at Dr Denison S.S. before entering the world of politics. From 1992 to 1994, She was the president of the Durham-York Progressive Conservative Association. In 1995 she was elected to the Ontario Legislature in former riding of Durham-York. Being elected again in York North in 1999, and to the riding of York-Simcoe in 2007, 2011 and 2014, she was the longest serving female MPP in the history of the province of Ontario. During her political career she held various portfolio’s, sat on many committees and held positions within both the Ontario Legislature and PC Caucus. Among note were Parliamentary Assistant to Premier Mike Harris, Deputy Opposition House Leader, and Deputy House Speaker. She had friends on both sides of the House and ‘Lady Munro’ was title often used by her peers - in both respect and affection. Julia felt very strongly about her constituents and their concerns. She was a present figure at both private and public functions during her 23 years in office.

Julia always had a strong love of animals and shortly after Genevieve was born, she and John bought a hobby farm in Georgina. Sheep, chickens, turkeys, pigs, Hereford and Shorthorn Cattle, a few milking Jerseys, horses and ponies all helped add to the joys of a country lifestyle. Julia relished her spare time in her gardens and was very knowledgeable about herbs. Purebred dogs were a lifelong passion of Julia and together with John and her daughter, the Coquetel name was synonymous with champion Standard Poodles, Borzois and English Pointers in Canada and the United States. Julia was well respected and a very keen exhibitor. Both she and John are Canadian Kennel Club life members of 50 years plus along with holding membership in several national and regional dog clubs in Canada and the US. She will be truly missed by her extended family, many friends, former students and numerous colleagues. She touched the lives of everyone she met and was an inspiration to women.

All are welcome to attend the visitation at the Roadhouse & Rose Funeral Home, 157 Main St. S., Newmarket, on Sunday, June 16, 2019, from 7-9 p.m. A funeral service will be held at Trinity United Church, 168 Main St. S., Newmarket, on Monday, June 17, 2019, at 2 p.m., with one hour of visitation prior to the service. If desired, memorial donations may be made to The Salvation Army https://salvationarmy.ca/donations/
Read Less

To send flowers to the family or plant a tree in memory of Julia Ann Louise Munro (Campbell), please visit our Heartfelt Sympathies Store.

Receive notifications about information and event scheduling for Julia

We encourage you to share your most beloved memories of Julia here, so that the family and other loved ones can always see it. You can upload cherished photographs, or share your favorite stories, and can even comment on those shared by others.

Posted Jun 24, 2019 at 10:38pm
Dear John & family,
We are both so sorry to hear the passing of Julia.
Julia was a wonderful and kind person. Our thoughts are with you and your family.
Debbie Isaacs
Malcolm Tubener
Comment Share
Share via:
JF

Posted Jun 18, 2019 at 06:20pm
Julia will be deeply missed but not forgotten. When speaking casually with Julia, she was agreeable, kind and felt like a friend even at a first meeting. Julia was one if our gems in politics and in life. Now she is an angel to watch over all.
My deepest sympathy and condolences to Julia's family and friends.
Comment Share
Share via:
MM

Posted Jun 18, 2019 at 05:53pm
Dear John and family, My heartfelt sympathy on the loss of your beautiful Julia. My thoughts are with you, Mary McFadden
Comment Share
Share via:
BH

Posted Jun 18, 2019 at 04:23pm
Julia, loved and admired, and we will miss seeing you at all our social functions in Georgina. RIP Bob and Patti Howes
Comment Share
Share via:
JK 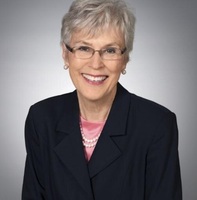 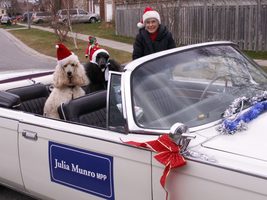