To share your memory on the wall of Paul Runstedler, sign in using one of the following options:

Provide comfort for the family of Paul Runstedler with a meaningful gesture of sympathy.

It is with great sadness that we announce the passing of Paul in his 81st year at the Markham Stouffville Hospital. Loving husband to Carol, beloved father to Mark. Predeceased by his son Todd, parents Bob & ... Read More
Robin “Paul” Runstedler

It is with great sadness that we announce the passing of Paul in his 81st year at the Markham Stouffville Hospital. Loving husband to Carol, beloved father to Mark. Predeceased by his son Todd, parents Bob & Eileen and brother Clare. Survived by sisters Janet Batchelor, Jill Colandria & brother Jim Runstedler.

The Runstedler family moved to Aurora in 1958 when Paul’s father Bob was transferred from Windsor to Aurora with the opening of the Sterling Drug facility. Paul began his working career at Sterling Drug where he met his wife of 56 years. After a few years at Sterling Drug he branched out into sales at Imperial Tobacco. Paul’s four-decade career in vending and office coffee began with Amco in Toronto which was purchased by Hudson Bay Vending in 1977, in 1987 it was subsequently purchased by a private equity and the company was renamed Red Carpet Food Services.

Paul was appointed to the role of Vice President of Merchandising and became a member of the Senior Executive Team. Until his retirement in 2002, Paul worked with the company’s suppliers, customers and employees. All people that Paul interacted with saw him as the consummate professional—treating everybody fairly and professionally. During this period, the Company pursued an aggressive acquisition program. Paul, with his knowledge and his reputation with the Company’s competitors, was instrumental in selecting, negotiating and integrating the many acquisitions that the company made. His business associates can attest that Paul embodied the saying of work hard play hard.

During his career he was an active member of the Canadian Automatic Merchandising Association where he served as president from 1990-1991. In 1988, Paul was the recipient of the Don Storey Memorial Award, for his integrity, ethics and contributions to the industry. Paul was also an active member of the Aurora Rotary Club for many years and served a couple terms as president. He was bestowed the Paul Harris Fellow by Rotary International for his contributions and “Service Above Self”.

Paul cherished his retirement, wintering in Naples, FL. Golfing, bocce and photographing sunsets were his diversions. The community association board also kept him busy.

Special thanks to the caring staff at the Markham Stouffville Hospital Stroke Rehab Unit.

Due to Covid-19 there will be no service at this time. A Celebration of Life will take place at a later date. Expressions of sympathy may be made in Paul’s memory to St. Andrew's Presbyterian Church, 32 Mosley St., Aurora L4G 1G9.
Read Less

To send flowers to the family or plant a tree in memory of Paul Runstedler, please visit our Heartfelt Sympathies Store.

Receive notifications about information and event scheduling for Paul Runstedler

There are no events scheduled. You can still show your support by sending flowers directly to the family, or planting a memorial tree in memory of Paul Runstedler.
Visit the Heartfelt Sympathies Store

We encourage you to share your most beloved memories of Paul Runstedler here, so that the family and other loved ones can always see it. You can upload cherished photographs, or share your favorite stories, and can even comment on those shared by others.

Posted Apr 24, 2020 at 03:04pm
Mrs. Runstedler & Mark.....so sorry to hear of Mr Runstedler' passing. Dan sent me the link just now. Having known Todd since very young age , reconnecting when you guys returned from living out west , and enjoying his friendship & that of you all as well is something I treasure in my life. Mr Runstedler a wonderful , caring man - worked hard for his family and instilled those values in the boys. Wishing you some comfort in a lifetime of wonderful memories - his laugh , his mannerisms , and the pride he took in his work and his family. Love to you all and will see you once this virus loosens it's grip and we get to celebrate his life. Take Care
Love , Bayne
Comment Share
Share via:
LT

Posted Apr 23, 2020 at 06:25pm
So sorry to hear of Paul’s passing. We have some great memories of golf tournament s and block parties. Our deepest condolences to Carol and Mark and family.

Posted Apr 21, 2020 at 12:22pm
Dear Carol & Mark, May your memories bring peace and comfort. We will never forget our friend and "Snow Bird" neighbor Paul. Hugs

Posted Apr 20, 2020 at 07:08pm
Our thoughts and prayers are with you, Carol and Mark. Paul always had a pleasant smile and was a man of high integrity. God Bless. 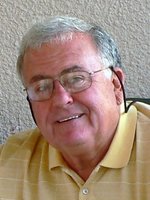